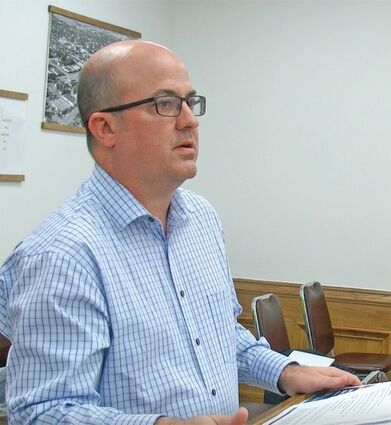 Darran Scott, project manager with Kimley-Horn of Oklahoma City, attended Tuesday's Alva City Council meeting to talk about the services his company can provide. The Kimley-Horn proposal for planning and design services is for an amount not to exceed $395,000.

In September the council approved a request for proposals for a master plan for an aquatics facility at Hatfield Park. These requests were received on Nov. 30. The Pool Finance Committee reviewed the proposals, interviewed the top three firms and selected Kimley-Horn as the firm to create the master plan. The council's Parks and Buildings Committee reviewed and approved the recommendation before it was submitted for city council approval Tuesday.

Mayor Kelly Parker explained the first draft of the proposal included master plans for Hatfield Park and Bud Rose Park. However, those were removed from this version to be addressed at a future date. Parker said the Kimley-Horn price represents 8.7 to 8.8 percent of the projected expenditure for the swimming pool, a fairly standard percentage for this type of service.

Scott was asked to provide information on each section of the proposal. He said the aquatic center is planned as a $4.5 million project and all services are based on that. His company is also working with grant-writing to apply for partial funding. Actual construction is expected to take about a year.

The first step is coordination and design management, basically gathering previous studies and information. Next will be a topographic survey which will be done by someone the City of Alva is already using in another project.

That will be followed by a geotechnical report which involves a company boring holes in the swimming pool area to determine soil makeup and stability.

Kimley-Horn will begin the schematic design with a two-day meeting with the pool committee and possibly a public meeting to determine the pool components and operations. In this phase the final design will be developed and cost alternates determined.

Next will be design development to add more detail such as finishes, equipment, lighting, outlets, pool water supply and waste, structural design and site utilities.

After that the final construction plans will be completed. Then the project will be submitted for bids followed by the contract award. Kimley-Horn will also provide construction phase services as requested.

Scott said the city can expect in person meetings from Kimley-Horn at least once a month with telephone follow-up. He said if bids come in higher than expected, some things like parking and outside lighting could be delayed to a later phase.

Daniel Winters asked if the full Kimley-Horn fee had to be paid up front. Scott said the city would be billed monthly for the work done to that point.

Mayor Parker said master plans for the two parks were separated from the pool contract but the city will be looking at those later. The costs for those are $49,500 for Hatfield Park and $26,500 for Bud Rose Park for a total of $68,000. He said the city is also looking at combining the Alva Recreation Complex (ARC) with the two parks and the swimming pool under a new parks and recreation commission. This would allow the other entities to use the funding stream from the one-half cent sales tax that currently goes just to the ARC.

It's hoped that developing master plans for the parks would allow the city to apply for other grants for improvements like the Transportation Alternatives Program (TAP). Kimley-Horn is willing to assist in finding and applying for such grants.

City Business Manager Angelica Brady said Alva is working with an experienced grant writer to prepare an application for a Land Use and Water Conservation grant for the aquatic center. For a report on donations and funding so far, see the article by Dr. Kay Decker in this issue of the newspaper.

Winters made a motion, seconded by Sadie Bier, to authorize the city manager to sign the agreement with Kimley-Horn. The motion passed by a 7-1 vote with Troy Brooks casting the dissenting vote.