Keeping an eye to the heavens 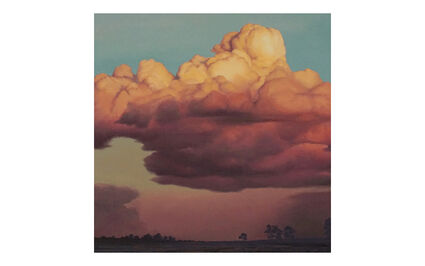 Holland painted this from a black and white photograph of an Oklahoma dust storm. He found a photo of a sandstorm to get the color right.

David Holland was in art school in the '80s when an industrial accident cost him the sight in one eye. But you won't catch the Oklahoma City artist's good eye downcast.

"I'm an avid sky watcher," he said. Oklahoma skies are among the most varied and entertaining in the world, he said. "I relish every moment of time I spend observing and photographing storms. I think of the storms I witness as a blessing that distributes the essential building block of all life on Earth – water."

In the best tradition of Western artists finding the sublime in nature, Holland paired his love of the Oklahoma skies with his love of painting, and over the past decade or so has built a reputation as an oil painter of astonishing cloudscapes.

He has had numerous exhibitions, including at the Cowboy & Western Heritage Museum, Gaylord Pickens Museum, the Blue Room of the Oklahoma State Capitol, Omniplex Science Museum Oklahoma, Oklahoma State Capitol Governor's Gallery, Nesbitt Gallery at the University of Science and Arts of Oklahoma, Kirkpatrick Center, Gallery for Oklahoma Artists, and the i.d.e.a. Museum in Mesa, Arizona.

The Oklahoman has written about him repeatedly over the years, as have other Oklahoma publications, including the Oklahoma Humanities Magazine, Oklahoma Gazette, Art FOCUS Oklahoma magazine.

Holland's majestic cloud paintings will be on display at Graceful Arts during the month of March. His exhibit kicks off March 4 with the First Friday Art Walk and a reception at Graceful Arts from 6 p.m. to 8 p.m.

The largest work that will be on display, "A Particle of Truth," is by far the most pricey, but Holland said, "You never know when a rich farmer will see a painting and decide he's got to have it."

Actually, Holland says that knowing his art is sometimes more expensive than some people can afford makes him feel bad. He doesn't like that aspect of it. But it is what happens when an artist sticks around long enough and gets good enough and produces paintings that people want to buy.

That traumatic accident in 1983 could have put an end to his dreams of being an artist, but Holland couldn't be beaten that easily.

"The way I lost my eyesight would make you cringe, so I'm not going tell you how that happened," he said, laughing, "but 95 percent of my optic nerve was severed." The traumatic experience happened while he was actually in art school in college.

"When that happens you go instantly from three dimensional sight to two-dimensional sight. So things looked different. And there was a period of adjustment in understanding how to visually conceive of space in a way."

For example, painting perspective seems virtually impossible. "Even driving at night, it's all black," he said. "You really have to learn how to readjust your vision to the world. That also applies to art, although, oddly enough, I kind of always thought that when you're doing art you're depicting two dimensions, so if you're seeing in two dimensions you don't have that confusion of the three dimensions.

"You have to see the roundness with the shape and color and shadow rather than with that other eye. An object gets its three-dimensional look because light's hitting it, so as it rounds off into space that's shaded differently, so that gives it the three dimensions.

"Now I think, in a way, my artwork overcompensates for only seeing two dimensions by making my artwork look extremely three-dimensional." That three-dimensionality is critical to giving the clouds the wildly varying depth such complicated forms require.

However, not having that depth perception does cause problems in the simplest things, including being able to tell when the tip of your paintbrush will touch your canvas. Holland said he learned a workaround for that. He puts a bright light over each of his shoulders. That way, as he reaches his brush toward the canvas, the shadows cast onto the canvas – one angling right, the other angling left – will meet when the paintbrush actually touches the canvas. "That was the only way I could see where the canvas was," Holland said, laughing again.

Getting On With Life

Holland went on to get his BA, and then he went about the business of making a living.

At first, he and his partner ran a copper birdfeeder company, but finally, in 2006, he decided it was time to try to make a living doing what he loved best: painting.

That year he attended an OVAC Creative Capital seminar that gave him the tools and confidence he needed to take that leap of faith. "It was a jam-packed weekend retreat where you learned literally everything about how to become a professional artist," he said. He recommends it to artists looking to go professional. "They can provide funding, too; they award grants."

He had a couple false starts – one was a 30-piece series of paintings, of which he only managed to sell two. "So that was kind of the end of that," Holland said. "I had a kind of crisis of confidence and thought about giving it up."

But then he decided what he needed to do was figure out something that he would love painting and that other people would love seeing (and, hopefully, buying). "So, that meant flowers or clouds. I mean, I grow flowers and I love looking at clouds, and watching them and photographing them. So I started doing some little pastels of clouds and really liked the results." He painted a few and took them to an art festival, and sold several "which was encouraging," he said.

Planting Seeds to Make a Living

When Holland first decided to paint full-time, he had to rely on his partner to pick up many of life's expenses – it's hardly an occupation that comes with a starting wage.

"No, I was not making an adult income, nowhere close," he said, laughing. But when he started painting clouds, things began to turn around. "That was a breakthrough of sorts for me because, well, they sold. You don't have to explain a cloud. There are cloud enthusiasts. Especially in Oklahoma, it's practically endemic! We're not afraid of them either, which is not the situation on the east coast," he noted, laughing.

Each year he'd paint more, paint better, sell more. Then he began to be invited to exhibit his work at various places, like the Myriad Botanical Gardens. He noticed he'd begun to get some followers, "and it just built from there."

All the people he met, the connections he made, the opportunities he had to show his work – they are all seeds that he plants that may one day grow to harvest. An artist must promote themselves.

Holland met a gallery owner in Santa Fe, New Mexico, who invited him to bring some work to the Oklahoma City branch he'd recently opened, and the gallery wound up taking five of his pieces.

"I was at the gallery every day painting there and keeping the gallery open, so I met a lot of people, even some very high-end collectors. A lot of connections were made. The gallery closed, and so I took my art to the (long established) gallery next door, Howells, and that's where I am now." Howells, he said, does regularly sell his pieces, so that is one part of his income, and then he also travels to festivals and other venues and sells his art that way.

Over the years, his art has begun to sell for higher prices. "Of course, that's what you want and what you're working toward, but it means that fewer people can afford your art," he said – clearly a thought that hurts him.

"You also price yourself out of the art festival market," he said. He did an art festival last year for the first time in two years, due to Covid, but he only sold three paintings. "It was a huge, huge let down because I was expecting this big payoff, but I realized my prices were too high. These were people going out for the day, not going out to purchase $500 pieces of art. 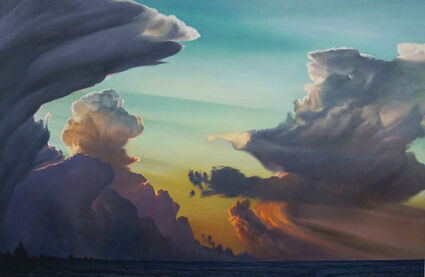 This painting, "A Particle of Truth," is a 4-foot by 5-foot painting of a storm Holland "experienced and photographed June 11, 2016, at 8:47," he said in an email. "I've never seen anything like it and was thankful I had stopped to take 15 or so pics of it. The painting is based on those photos and has a depth to it that you have to see in person to fully appreciate. Multiple layers of storms were blocking the setting sun to reveal stunning color in the sky and within the clouds, some of which were glowing from inside."

"So if I were to do that again, I would re-strategize and have an inexpensive T-shirt or something. There's a whole licensing, merchandising world out there that you have to have the image before you can approach, but once you're an established artist you have those images."

Omni Hotels, which features artwork by Oklahoma artists, approached Holland with a request to buy a license for his work. "What they did was take one of my paintings and cut it into vertical strips – so it's a vertical strip of a cloudscape – and then they printed those to fit inside the alcoves between each room. And that was out of the blue because they probably Googled Oklahoma artists and I'd just been around long enough that I showed up."

"All those little connections that pan out ... but you have to really promote the heck out of yourself, which for some artists is really really difficult to do. And they don't, they can't.

"The thing about art, to me, as long as you're doing it, I don't care the quality; it's the commitment. The quality can come after the commitment comes. If you want to draw well, then draw, draw, draw, draw. There are people who are naturally talented, but these are also skills you can learn."