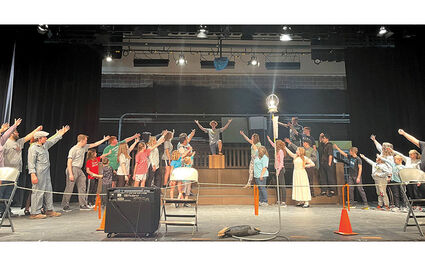 Cast members rehearse choreography to a scene from the upcoming musical "The Music Man" at Northwestern. The show will take place in Herod Hall Auditorium on April 7-8 at 7 p.m. and April 9 at 2 p.m.

More than 60 people have been in rehearsals, building set, getting costumes and stage props ready as the Northwestern Oklahoma State University Fine Arts Department prepares for "The Music Man" scheduled for April 7-8 at 7 p.m. and April 9 at 2 p.m. in Herod Hall Auditorium on the Alva campus.

Patrons may purchase tickets in person with cash or check at the door starting one hour before each performance.

According to the Music Theatre International website, the following is part of the show's history and awards:

"The Music Man is a musical with book, music and lyrics by Meredith Willson. The show is based on a story by Willson and Franklin Lacey. The plot concerns con man Harold Hill, who poses as a boys' band organizer and sells band instruments and uniforms to naive townsfolk before skipping town with the cash. In River City, Iowa, prim Marian the librarian sees through him, but when Hill helps her younger brother, Marian begins to fall in love with Harold. Harold, in turn falling for Marian, risks being caught to win her.

"In 1957, the show became a hit on Broadway, winning five Tony Awards, including Best Musical, and ran for 1,357 performances. The cast album was awarded 'Best Original Cast Album' at the first Grammy Awards ceremony in 1958 and was inducted in 1998 as a Grammy Hall of Fame Award winner. The show's success led to revivals and a popular 1962 film adaptation and a 2003 television remake. The title role has been played by a succession of stars including Robert Preston, Dick Van Dyke, Craig Bierko and most recently Hugh Jackman. The production starring Jackman and Sutton Foster is directed by four-time Tony Award winner Jerry Zaks, with choreography by Tony Award winner Warren Carlyle, and opened this spring at the Winter Garden Theatre in New York City."

Kimberly Weast, professor of theatre arts and Department of Fine Arts chair, is serving as the director of the musical and lighting designer while Karsten Longhurst, director of choral studies and instructor of music, is serving as the music director. Erin Davis, university relations specialist, and Mickey Jordan, director of technical theatre and Herod Hall facilities manager, are serving as the choreography team. Jordan has also designed the set/prop design and joined Weast in working on costuming. Patrick Wilson, Northwestern speech/theatre alumnus, is the Stage Manager while members of the student campus organization Castle Players will be serving as the House Management team. Members of the theatre production classes helped build the set and prepare lighting. Jerad Bradt with BOSS Music will be the sound technician.

"The process of preparing for 'The Music Man' has been extremely enjoyable," Weast said. "The university students and faculty have led the way with their leadership and commitment. I have so enjoyed working with the youth, children and the fabulous Pick-A-Little Ladies. There are many community women in town who have volunteered to create a variety of beautiful costumes for the cast. It takes an army to present a musical this large."

Elementary students participating throughout the production include:

"It is no secret that Meredith Willson's 'The Music Man' is a staple of American musical theatre," Jordan said. "In an age of uncertainty one often longs for nostalgia, and as the playwright/composer instructs 'The Music Man' is intended to be a valentine to a bygone era that exists only in our hearts."