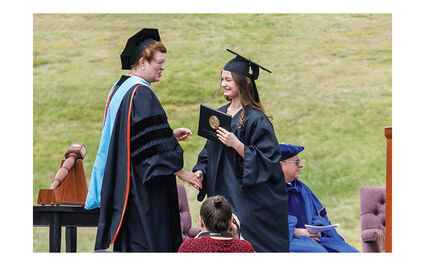 Frances Mustard shakes hands with President Cunningham as she receives her diploma.

Blue skies with scattered clouds and a comfortable temperature accompanied by light wind made Ranger Field the perfect setting for the 123rd Northwestern Oklahoma State University Spring Commencement in Alva.

Following the invocation, Dr. Janet Cunningham, president of the university, welcomed the graduates and audience.

"This ceremony is extra special because it is my last one," said Cunningham who is retiring. "It has been a ...." With tears and a choked voice, she tried to continue. The audience applauded in sympathy and encouragement.

"It has been an incredible honor serving you, our students for so many years. You have made a difference in my life, and have impacted me in so many ways," she continued as she struggled with emotion.

She introduced Jeffery Hickman, the chair of the Oklahoma State Regents for Higher Education. "We're so honored and pleased to have him in attendance today," she said.

With that pause, Cunningham calmed her emotions to continue, "John Dewey, an American philosopher, once said, 'Education is not preparation for life; education is life itself.'

"This education you have earned will give you opportunities for a career and to even earn more throughout your lifetime. Earning your diploma does not mean your education ends. You will continue to learn from others around you, earn advanced degrees later in life or even provide education to someone else. You may no longer be in the classroom daily, but your education in life will continue."

She told the graduates they worked hard to accomplish their goals while "having quite the experience through a global pandemic then somewhat back to normal again."

Praising their perseverance, she said, "You have already proven you can accomplish difficult things."

Cunningham introduced commencement speaker Dr. Cheryl Evans who graduated from NWOSU in 1992 with a degree in mass communication. She is president emeritus of Northern Oklahoma College, working in higher education for most of her life. Prior to her position at NOC, Evans served 17 years at NWOSU, 10 years in the mass communication department and managing the campus radio station and seven years as dean of the university's Enid campus.

Evans expressed her appreciation of Dr. Cunningham, "She has dedicated her entire life to this institution, and I'm honored to be invited back on this stage as she oversees her final commencement as president of Northwestern Oklahoma State University."

She spoke of Cunningham's impact in her life as a friend, mentor and partner in education. She said before Cunningham became the first female president of Northwestern, she taught Evans' husband accounting which enabled him to support their family financially.

After praising Cunningham "most of all for her love of students," Evans invited everyone to stand to

"Education is one of the best investments in yourself," Evans told the graduates. She said in preparation for her speech, she looked through the list of graduates. She said some had the same major she did in college, some came from the places where she had lived, and for at least one student, she had taught their parents in college. But they all had one thing in common. "We are all alumni of one of the best institutions in this great state, Northwestern Oklahoma State University," she said. "You will always be a Ranger. Just like me, you can ride with pride."

She described her own path. Like Regent Hickman, Evans graduated from Cherokee High School and attended Northwestern that fall, moving into South Hall. However, in the summer of 1981 a unique opportunity arose for her and her future husband Tom Evans. They bought a retail furniture store in Cherokee. During her sophomore year, they were young married students operating a business and attending college. Tom attended classes Monday, Wednesday and Friday while she went to class on Tuesday and Thursday. Then she stopped college so her husband, who was ahead of her in school, could finish. Their first daughter was born in time to attend Tom's commencement ceremony.

After their daughters were both in school, Evans said she returned to college, receiving her bachelor's degree at the age of 30. Her commencement was on May 8, and now she was speaking at the May 7 commencement 30 years later. Evans went on to pursue her master's degree while teaching as an adjunct at NWOSU. In 1994 she earned her master's and became a full time instructor. At the age of 38, she obtained her doctorate from Oklahoma State University after driving back and forth to Stillwater.

Evans encouraged the graduates to keep up their ties with Northwestern. "Many advisers bring success," said Evans, quoting from Proverbs 15:22.

"Don't be afraid to ask for advice or help from those you trust," she said. "I had many Rangers along the way who helped while I was in school and then more after I graduated. That's the great thing about belonging to this university. They will be here for you in years to come."

Evans shared some of the things that have helped her throughout her career. "Keep going after what you want; if you don't you'll never have it. 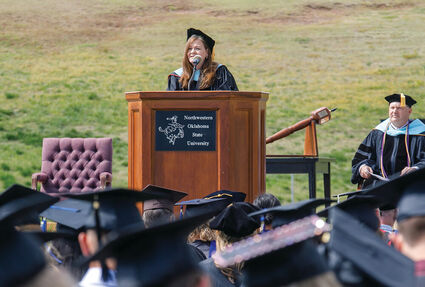 "Continue to ask for what you want. If you don't ask, the answer will always be no. And even when the answer is no, be gracious. Don't burn bridges.

"You will encounter setbacks. Every one of these faculty members, everyone on this stage, has encountered setbacks. But you just regroup, take a deep breath and continue moving forward. It's impossible to live without failing at something. I didn't complete college the first time I started. I didn't even get the job as president of NOC the first time that I applied. Sometimes you're going to encounter roadblocks. It just means 'not right now.'"

She encouraged the graduates to "surround yourself with people at home and at work who see your value and remind you of it. But especially, believe in yourself. You've done this. You can do anything."

"Congratulations to the Northwestern graduates of 2022," Evans said in closing. "Ride, Rangers, Ride!"