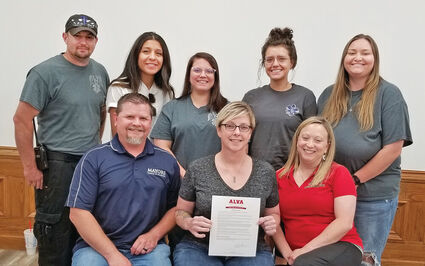 The rates in Resolution No. 2022-003 were presented to the city council a few months ago, but no action was taken. Some councilmembers wanted the city to explore the idea of memberships as an alternate method to pay EMS expenses. Mayor Parker said that had been studied but was determined not to be an appropriate method.

Troy Books asked if the city has received any of the 522 EMS District funds yet. Parker said no. The 522 EMS Board wants each EMS service to sign a contract with them. Parker said the city wants to make some changes in the contract, and until that is signed, the city will not receive any of 522 district money.

Randy Stelling made a motion to adopt the new rates, seconded by Gail Swallow. The motion passed 6-2 with Brooks and Taylor Dowling voting no. (See the rates in the accompanying sidebar.)

The city is in the process of developing budgets for the next fiscal year which begins July 1. Mayor Parker said drafts of the budgets had been emailed that day to council members. One of the updates is an insurance rate increase of 19.9 percent which will result in approximately $97,000 being added to that expense.

Another which would be affected by an upcoming agenda item was the utility rate increase based on the May consumer price index (CPI). The CPI is 8.3 percent so that would increase budget revenue by approximately $313,000.

Also not included in the draft budget are inflation increases in the cost of supplies and maintenance.

Parker said those are items are not included but would be prior to council approval. He said the city is required by statute to have a public hearing regarding the budget.

At the mayor's request, Brady explained the timeline. The public hearing on the budget is generally held prior to the June meeting of the city council. The budget has to be approved two weeks prior to the beginning of the fiscal year on July 1. There are some publication requirements to be met also. Brady said it would be up to the Finance Committee to make sure the council doesn't need to have any special meetings prior to the regular meeting on June 20.

"Does this include the cost of living for the employees?" asked Stelling.

"This includes a four percent cost of living increase for employees and a step increase for those that qualify," replied Parker.

Stelling asked approximately how much the pay increases would cost, and Brady said about $300,000.

Parker said the council usually doesn't get the budget figures this early. He expressed appreciation to Brady, her staff and the finance committee for their efforts. He said back in February when the budget retreat was held, department heads made sure information was turned in so they could be at this point in the process.

Due to the length of the agenda, Parker suggested discussion be limited to five minutes but anyone having points to offer should get them to him in writing soon, and he would get them to the finance committee.

Dowling asked, "What are some of the capital outlay projects outlined?" He specifically asked about the rec center (Alva Recreation Complex). "It's not any different than what we discussed at the budget retreat," said Parker.

"Just to refresh my memory, I think they said they were going to chip and seal the parking lot for about $100,000 and then about $30,000 to redo the playground equipment. Is that what they were budgeted for?" Dowling asked.

"What you have with you is the operating budget," said Parker. "It does not include the capital outlay," said Brady.

Dowling also asked about police and fire department salaries. "The DR, which is budget directed, is significantly lower than the proposed budget," he said. "Department requested (DR)," clarified Daniel Winters.

Brady said she would have to check on that. One of the things they did in the budget was to make sure they had enough salaries for 24/7 coverage. "I know when we were looking at the police department for this year, we thought there weren't enough monies allocated there," she said.

Dowling said he knew they had been trying to hire more people. Brady said they still have open positions, and Parker said the proposed budget does reflect salaries for open positions even if they are unfilled and have been unfilled for some time. "This budget reflects those expenses as if those positions were filled," he said. Winters added that this year's budget didn't do that.

Dowling also asked if sanitation department polycarts would be included in the budget, and Brady said that was still to be decided. Stelling said there has been a huge increase in what the polycarts were going to cost earlier and what they cost now.

He again asked councilmembers to put things they want considered for the budget in an email so the Finance Committee can look at everything moving forward.

A video of the city council meeting may be viewed at http://www.AlvaReviewCourier.com.