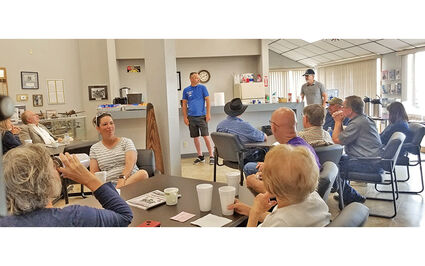 This is a small portion of the large crowd including several local pilots attending the Friday morning Alva Chamber Community Coffee held at Alva Regional Airport.

The new furniture in the Alva Regional Airport terminal building wasn't quite sufficient to seat all the guests Friday morning. A large crowd gathered for the Alva Chamber Community Coffee. There were no special speakers. Instead, Chamber Executive Director Jodie Bradford asked for an update on the airport and then opened the floor to anyone who wanted to talk about community events. 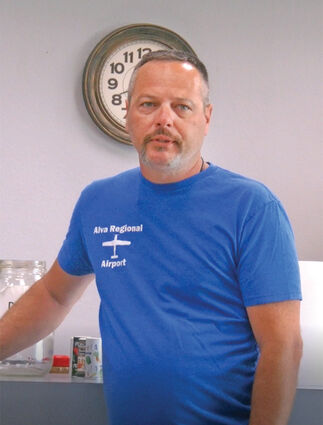 Airport Manager Derrick Courson was caught by surprise when offered the chance to speak, but he proved up to the task. He spoke about the new furniture, funded by a donation, not only in the lobby but also in the pilot's lounge. The airport will soon have a modern digital AWOS, an automatic weather service for pilots.

Local pilot Bob Baker added information about the Sunday morning breakfasts for those who want to fly to the airport as well as locals who want to drop by. Another pilot, Max McDermott, suggested the local university look into offering an aviation program for students. Both offered praise for the work Courson is doing at the airport.