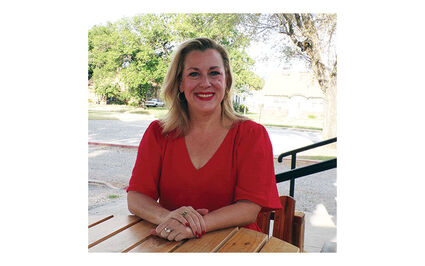 Kendra Horn who is running for Senate, pauses to enjoy breakfast outside behind The Vanilla Bean in Alva Wednesday morning.

On a balmy Wednesday morning, at the tail-end of a whirlwind stop in Alva, former Congress member Kendra Horn sat talking with the Review-Courier over a leisurely open-air breakfast behind The Vanilla Bean. Her press agent kept a close eye on her phone, and a niece chattered happily about all the cats she'd discovered wandering or stalking or sleeping in their shiny collars.

She begged a piece of bacon from Aunt Kendra, who was willing to part with the savory tidbit until she discovered it was destined for a cat's palate. "But they didn't like the sausage," protested the niece. Aunt Kendra was firm. Bacon can be relinquished to family members, but not to cats.

The incident was merely part of the flow of the morning: talking politics to reporters, discussing food philosophy with nieces, repeatedly attempting to actually eat her own breakfast until time runs out and she has to box it up to go.

"This always happens," she said and grinned. It's the life of a candidate, the life she's chosen.

Horn, a Democrat from Oklahoma City, is running for U.S. Senate, hoping to fill Sen. Jim Inhofe's seat. The night before the Vanilla Bean breakfast, she gathered with about 15 people at Cancun Restaurant in Alva, mostly mingling and later answering questions. Karla Horn (no relation), the chair of the local Democratic Party, said Horn spoke of her good friends from college days who live here, and about the 25 bills she'd authored or co-authored and gotten signed into law during her brief stint in Congress. She spoke about the need to find common ground with those across the aisle, to more effectively get bills through the Senate. She said she's looking forward to running against Markwayne Mullen or his runoff competitor.

The next morning over coffee and eggs, she spoke just as passionately about many topics, particularly the need to ensure the voices of all kinds of Oklahomans be heard.

Redistricting – or, to use her word, "gerrymandering" – after the 2020 Census has made the divisiveness worse in Oklahoma, she said. She represented the fifth district in the House from 2019-2021. At the time, the district consisted of most of Oklahoma County and all of Seminole and Pottawatomie counties.

"That's what the district was; the changes made to it have been pretty significant," she said.

"When I ran the first time, 2017, 2018, one of the reasons I knew there was a potential pathway was that demographics were changing, people were changing, and I felt like we need representation that speaks to something else in our communities, that represents a broader section.

"We had a (Congress) member at the time who was not responsive, he wasn't engaged, and I think part of the problem of gerrymandered districts – which I'm always happy to talk about, because I think it's such a problem – is that it leads to members in safe districts who feel like they don't have to talk to anybody; like, they just feel like 'I'm only talking to my people' or 'I'm only going to listen to the people who support me.'

"And that's upside down and backwards from what it should be. I'm idealistic enough to really believe that I should represent everyone, and that's what I strove to do. The gerrymandering of last year was unsurprising, but disappointing. But I'm not disheartened; I'm more determined."

About 90 percent of districts in the House, she said, are safe districts. She attributes some of the division and hostility in the country to this practice of allowing representatives to redraw their own districts; she favors an independent redistricting body, something neither Democrat nor Republican.

It was the first of many topics that arose.

Reaching for the Center

Horn seems to say that the Oklahoma Standard is embodied in the political center of Oklahoma, not its extremes. She said she believes Oklahoma still has a strong center.

"But I don't think our center is being represented very well in our elected officials," Horn said. "And I don't think it's being well-represented in our media, and by that I mean our 24-hour (broadcast) news cycle punditry. And it's also been impacted, unfortunately, by the decline in local small papers.

"It leads us to believe that everybody is on these edges but my experience, being out in the community, talking to people, is just the opposite: I hear from Democrats, Republicans, Independents, and anything in between – they're tired of this extremism. They're tired of the finger-pointing and the blaming, angry rhetoric, and they feel like they're alone, like they are not represented. Their voice isn't heard, and they don't see in the people serving in elected office people who look like them or think like them."

Some political operatives create problems to keep people afraid, and they use the fear to divide the people, she said.

"I think they think if we're distracted, we won't see that they're not fixing the real issues, the issues we need to be fixed. Because if we're kept distracted by people who say, "Don't trust Them, even though they're your friend or your neighbor,' and they divide us, then it's easier to keep control. Division leads to control.

"Also, I think people are opting out. That's where I think the center is: a lot of people are throwing up their hands." She's heard people say, "Does it even matter if I vote, if I don't agree with the loud edges?" 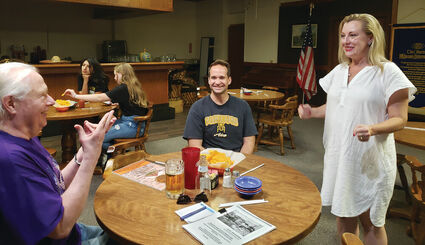 "I say, it absolutely does! Do you know, Oklahoma is last in the nation in voter participation and voter registration? Dead last. And part of it comes from that sense of, 'Oh, it doesn't matter if I vote.' We need people to pay attention at all levels: school boards, city council, county offices, state legislature, statewide, and ask better questions. Until we get more people engaged, more people serving in office who actually care ..." her voice trailed off.

She has "no interest" in the name-calling, garbage-throwing side of politics, she said. "It's damaging. Because ... because I love Oklahoma," she said, getting a little teary. She's a fifth-generation Oklahoman who grew up in Chickasha.

"This is a really special, magical place, and I don't think we often see it, and the outside doesn't see it and often cloaks us in stereotypes, and that's not who we are. But the fear and division that causes people to just opt out – we need to do something different."