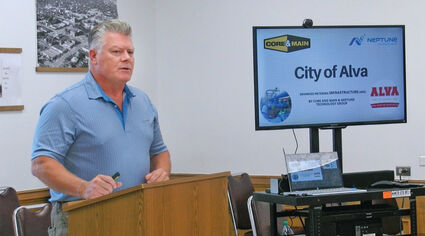 The City of Alva is facing a water meter dilemma. The system for reading water meters remotely is failing at a rapid pace, and it isn't even paid off yet. The Alva City Council met in a special session at noon Thursday to hear a presentation on a possible replacement for the remote reading equipment. All council members were present.

Water Superintendent Drake Lewis says his calls to Mueller, the company that installed the current system, are not being returned. Apparently that company was about to close when someone else bought the business. Now Alva is unable to get replacements for malfunctioning electronic meter readers.

Lewis said six months ago, the system was operating at a 90 percent level but it is now at 70 percent. He said it is "failing pretty rapidly." As a result, the water department staff has to read about 600 meters manually each month. Lewis said it takes two or three employees away from regular duties each month for up to two weeks. That's a burden, especially now when the city is experiencing numerous waterline breaks due to the heat and dry soil.

According to Bill Shives, territorial sales manager for Core & Main, Alva isn't the only Oklahoma location experiencing problems with Mueller systems. He named Laverne and Helena in this area. Mayor Kelly Parker said he looked online and found numerous lawsuits against the company.

Kevin Cherrington, AMR/AMI product specialist, and his wife Stacey Cherrington, IT director, presented information on their company and its services. Kevin Cherrington said Core & Main has been in business since 1928. The company is the largest water system distributor in the U.S. They have stores in Oklahoma City and Owasso as well as other states. Those stores keep supplies in stock so replacements are readily available.

Cherrington said Core & Main tailors systems to meet the needs of the water system with both AMR (drive-by readings) and AMI (cellular readings from towers). They have a national metering group and have over 200 systems in the Oklahoma. He said Jenks, Oklahoma, had about a 50 percent water loss (unmetered water flow) before installing this system. They are now making $1.5 million more from water billing and will pay for the system in three years.

Core & Main uses Neptune equipment which is U.S. made in Alabama. The company has been in business since 1892. Neptune has a test lab and is on the cutting edge of technology. They use no third party supplies; everything is made at the Alabama plant. They even make their own molds and have a foundry for brass fittings.

"A better meter does matter," said Cherrington. "Neptune is No. 1 for a reason."

The meters have 20-year 100-percent accuracy, he said. The battery life is also 20 years. The meter radios store up to 96 days of hourly consumption readings. At a question from the council, he said if a device fails, they don't do repairs. They replace the device with the latest model. Drive-by readings are faster their system sending data at 10 times the signal strength of Alva's current meters. The fittings that connect to waterlines are made of brass instead of plastic.

He said Hooker uses the cellular system and can read 500 of their 800 meters at city hall.

According to Cherrington, the company has experience interfacing with Incode, the software Alva uses for billing. Their data can feed directly into the billing system without the need for manual input.

Stacey Cherrington took the floor to show the depth of information available from their system. Information is stored by Amazon cloud with security protocols. No individual water customer information such as name with street address is stored.

It's estimated that a drive-by meter reading system for Alva would cost about $1.5 million. Mayor Parker said he's discussed financing options with the city engineer. The city can apply for a REAP grant for $75,000. Having city funds to match the grant would help Alva score better, he said.

A CDBG grant was investigated, but that cannot be spent on equipment. Water meters are considered equipment so that option is out.

Parker said there are also grants available through OWRB and DWSRF. Applications could be for $500,000 with one grant being at no cost. The other one is 75 percent forgiven with the city paying back $125,000. 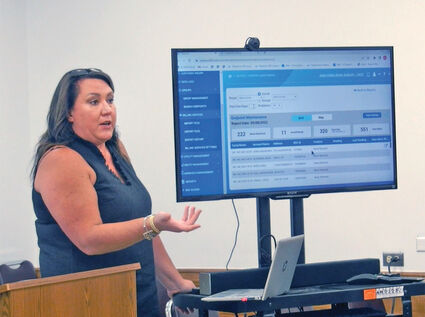 Stacey Cherrington, IT director with Core & Main, shows some of the information available from data stored in meter readings.

Until the city knows if a grant has been awarded, there's not enough money to replace all the meters. But Parker said the city needs to get some meters in the ground now.

Parker has also contacted Census, the second leading company for meter systems. He said another meeting could be scheduled to hear from them.

After more discussion and suggestions from Core & Main representatives and council members, it looks like the first step is to nail down specifications for bids. Kevin Cherrington and Shives recommended being very detailed and specific in what the city wants. They said being vague and non-specific is where cities get in trouble.

While no action was taken by the council, it appears they plan to pursue bid specifications for replacing the entire system of meters. Then the actual installation could be done in phases as the city has need and money.

A video of the two-hour meeting may be viewed at http://www.AlvaReviewCourier.com.