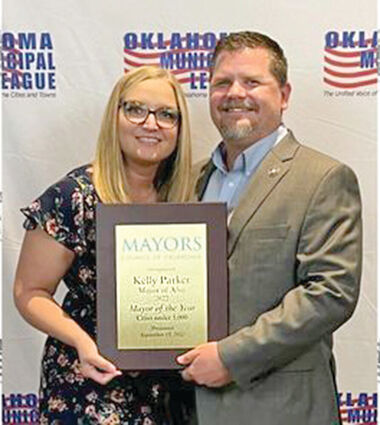 Mayor Kelly Parker was honored with the Mayor of the Year award for small towns. Acknowledging that honor, Parker gave a prepared statement during the Alva City Council meeting Monday night.

"We also attended the awards assembly. All towns and cities are dealing with the same issues as Alva. Some are on a larger scale. Some are on a smaller scale. It's easy for us to focus on the mistakes and challenges, but it's important to not lose sight of the great things that we do.

"In my time as mayor, there have been nearly $9 million of positive outcomes and achievements that have helped make Alva better. Don't lose that in the challenges and the complaints. We have a great many employees and citizen volunteers doing incredible things every day that have allowed me the distinct honor of receiving Mayor of the Year for small towns and cities.

"What I've come to appreciate about this particular leadership position is that you have to learn to bear the brunt of the criticism, but sometimes – when you are surrounded by people who are more talented than you or knowledgeable than you and just as passionate about our city – sometimes you receive the credit that is due to far more people than could ever fill the seats of this council or any elected position."

Parker said city staff members are working on an event to celebrate the award. "I also want to invite the people of our community, volunteers and other folks, that help make Alva great to come celebrate with us," he said.

"This is an award that is given to mayors but honestly it's everybody else who earns it. I'm truly honored and humbled to represent our community, and I look forward to all the great things that we're going to experience in the days, weeks, months, years ahead," Parker concluded.

During his report to the city council, Parker said he plans an official recognition of the water department for their work repairing lines throughout the city, inside and outside the city limits. "We could have had them tonight, but they are out repairing another 16 inch line break," he said. It's hoped they can be on the agenda for the October meeting. "I think they are doing a super job and really appreciate their dedication to the people of our community," he added. The city has experienced numerous waterline breaks during the hot, dry summer.

As was reported in the Alva Parks and Recreation Board report, Parker said he has signed all the documents in the swimming pool Land and Water Use grant application which was to be hand delivered on Friday.

The OML is one of the oldest (107 years) and largest organizations in the nation representing cities and towns. The mayor said the OML conference provided an opportunity for contact with a number of companies. He spoke with Tyler Technologies which provides and maintains the city's Incode software about problems getting reports generated in Excel. Parker said Tyler will be switching to a cloud-based version which should help with the problem.

He talked with American Legal about updating the city's codes which needs to be done periodically. He said the company is highly recommended by OML and will cost less than the company used previously. There will be more information on the recodification later.

Parker talked with Myers Engineering about city water projects. Later Lewis took the city engineer around to the four water meter companies at the conference where they discussed meter options.

The mayor talked with Kimley Horn about the city's swimming pool project.

He talked to Waste Connections, a sanitation service company. Parker said the city's sanitation department is "doing a great job but the matter of us getting the resources so they can do a better job" is a concern. The company will be sending information.

Allen Brooks, a bond attorney, told Parker that Alva's water meter project could be in line for a grant of $800,000 from OWRB (Oklahoma Water Resources Board) if the grant proposal can be filed on time.

The mayor also talked with Parkhill engineer Toby Baker about airport projects during the conference.

"The networking this year was great," Parker said of the conference.