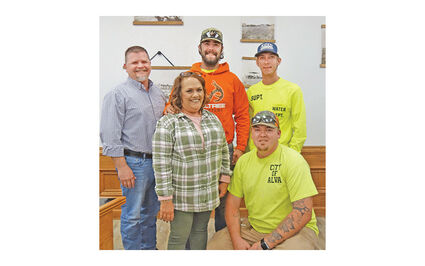 Alva Mayor Kelly Parker announced Monday that eight city employees were being honored for their "above and beyond" work. Four of the employees attended the Alva City Council meeting for the presentation. Parker said some of the recognitions were long overdue while some were for more recent contributions to the city.

"Since Angelica (Brady, former city business manager) left, Heather (Bonham) has taken on many additional roles with the city and has done an outstanding job in doing so," said Parker. "She's put in many, many, many late nights, and she's gone out of her way to make sure other folks are taken care of as well. I know that on more than one occasion, she brought food and drinks out to you guys while you were working on waterlines."

Addressing the three members of the water department being honored – Drake Lewis, Jordan Ungles and Triston Cayot – Parker said, "It's been discussed at length how many waterline breaks we've had in the city this summer, and they have worked through the night. They have not complained. They have taken the call on a Friday night when these things happen and have put off their own personal activities to make sure the folks in Alva continue to have water, and so I really appreciate that. Certainly not something that everybody would do so thank you guys."

The four members of the sanitation department being recognized – Robert Burney, Bryan Barnett, Jacoby Merrill and Ricky Woodard – were not present for the meeting. "They are the ones who have been pointed out to me because they've been primarily, whenever it has come to it, those are the guys that have primarily manned the flatbed pickup when it comes time to pick up trash. Picking up the garbage is a less-than-glorious job on most days, and then when you have to do it without the proper equipment, it presents greater challenges," said Parker.

As part of the recognition, the eight employees will receive an extra day of vacation, two tickets to the Rialto Theatre and dinner for two at any restaurant in Alva.