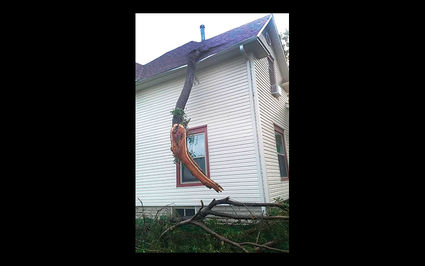 Located at Campbell and Eighth streets in Kiowa, the home of Pat and Brenda Myers had a big, thick tree branch penetrate the southwest side of their roof at the most peculiar angle. When the branch crashed through, lathe, plaster and more flew all over their bed and the entire room. Fortunately for the Myers, the storm had awakened them and they had gone downstairs and were not in their bedroom.

Many Kiowa residents said their homes shook, the sound was deafening and it was scary. No, it wasn't a tornado. It was straight-line winds estimated at between 80 and 100 mph, according to Kiowa City Administrator Lou Leone and Kiowa Police Chief Steve Johnson.

At approximately 1 a.m. Friday, the catastrophic winds hit Kiowa that also raged into some neighboring towns as well. Huge trees were uprooted, some barrel-size branches slammed into walls of homes. Hay barns were blown away and shed doors sucked inside the building. Water tanks flew through the air, dropped a mile away from where...